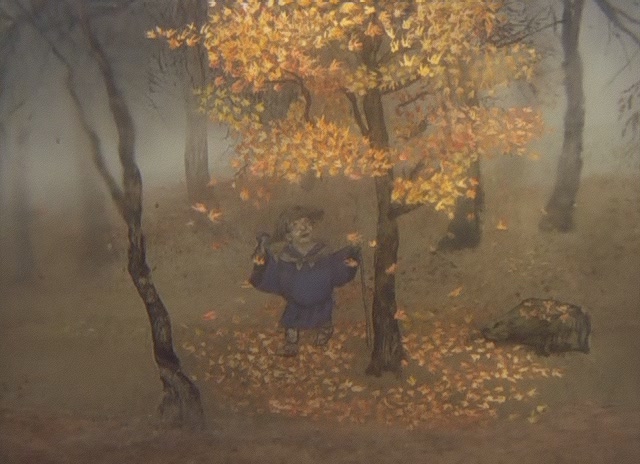 In 2004, the Russian journal Kino Art published a lengthy interview with director Yuriy Norshteyn about his segment for the 2003 Japanese film "Winter Days" (the interviewer was Tatyana Iensen). Here's some more info about the film:
http://en.wikipedia.org/wiki/Winter_Days

You can see his segment on Youtube over here.

Yuriy Norshteyn is perhaps the most revered animation director in Russia. He may be considered the conscience of the artform. He's been working intermittently on a feature film adaptation of Gogol's classic story "The Overcoat" since 1981 (half an hour of which, by the way, will be released by the end of this year). He works with his wife, Francesca Yarbusova, who does all of the final designs and art for his films (he directs, animates, and writes the scenario). For more information, here are two wikipedia articles about them (though they are a little misleading and not quite up to date):
http://en.wikipedia.org/wiki/Yuriy_Norshteyn
http://en.wikipedia.org/wiki/Francheska_Yarbusova

Last month, Anipages Daily (an excellent animation blog which focuses mostly on Japanese animation, but also on obscure gems from other places) published a translation of the interview. Most of the translation work was done by member Mihai Luchian, and it was touched up by Benjamin Ettinger (the webmaster). I've also gone over it (making a few changes to be more faithful to the original words), and translated the last question which was omitted from the version on Anipages. To be honest, I'm not entirely sure that I found the right words for the last question, so feel free to correct me.

This is a very long interview, so you should probably have an hour or so of free time. But I think it's worth it.

I'm also working on translating another interview with Norshteyn - hopefully it'll be finished within a week or two.
( Collapse )

(here's part two of the interview, which is translated as of June 18, 2009)
Collapse