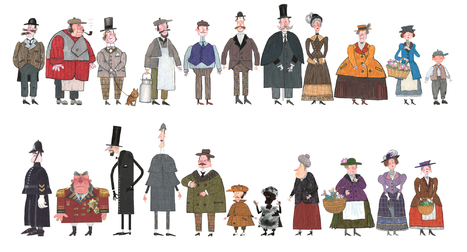 Cartoon Brew recently posted an article about how many short filmmakers are using websites such as IndieGoGo and Kickstarter to raise funds from the public for their projects. Ironically, this coincided with some bad news from a Russian project...

As I wrote before, Aleksandr Bubnov is trying to do the same thing in Russia for the sequel to his very funny animated Sherlock Holmes parody, but without the benefit of any websites - the concept was to raise $70,000 by getting 700 people to donate $100 each. Over 300 people promised money, but only 61 have paid so far - likely due to the financial recession which hit Russia particularly hard.

Unfortunately, Bubnov's latest update isn't very optimistic. His money’s running out - he had to move out of the studio space and let his team go, and only has money for making the animatic and renting his apartment. He’s working alone now, and his health is failing because of spending half the day working in front of the computer. And it would be a real shame if he were unable to finish it, because this guy is absolutely brilliant (by the way, he has a masterclass coming up on Feb. 15 at the British Higher School of Art and Design).

A few months ago, I volunteered my time to translate most of the project's official website into English. Unfortunately, the translation hasn’t been put up yet - maybe Bubnov doesn’t hold much hope that the English-speaking audience will be interested. So I'm going to post the translated materials over here - at least someone will see them (I especially recommend reading the first part of the screenplay). The bank account info for donations to the project is here. Bubnov's email is bubnov@aha.ru.

P.S. Maybe Bubnov would have more luck trying to raise funds on those websites that Cartoon Brew mentioned? His first film was quite popular not just with Russians, but also with Americans, British and Germans. Of course, it's an expenditure of effort, and Bubnov himself doesn't speak English, so I can see why he's avoided it so far...