I haven't posted much, but that's not because there's been no news!

Here's what Animatsiya.net (which aims to be a collection of Russian, Soviet and "near abroad" animation where the films can be watched with subtitles directly on the site) looks like at the moment: 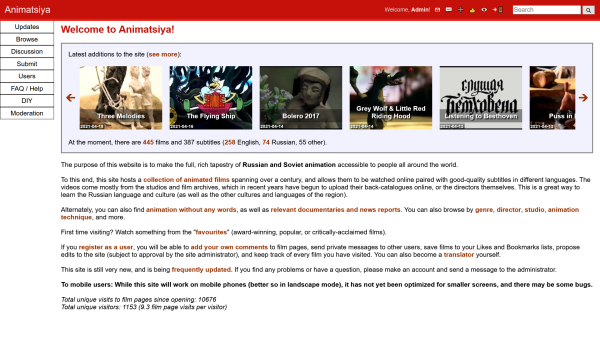 A lot of new translations have been completed, and old ones corrected. I will write about all this at some point - I always find it easier to do things than write about what has been done.

Looking at the most recent films, you may notice that they're all by Garri Bardin - that's no accident, as me and Eus (who has also been helping a lot, as well as rebuilding his Youtube channel) have been focusing mainly on one director at a time. Many of Bardin's most well-known & distinctive films were made in the 1990s, including Grey Wolf and Little Red Riding Hood (1990)...

...which Animation Obsessive wrote about two weeks ago. The most recent Bardin addition to the site (Three Melodies / Три мелодии, 2013) was actually uploaded to Bardin's Youtube channel incorrectly and looks all stretched if you view it there, but... when viewed on Animatsiya.net, it looks normal.

This is because today, I fixed a problem that had been bugging me for a long while - I added a way to correct the aspect ratio of films that had been uploaded incorrectly to Youtube (as I wrote earlier, this is true of most of Soyuzmultfilm's catalogue). Most of Soyuzmultfilm's cartoons are now corrected on Animatsiya.net (including when you press the "Fullscreen" button). There's now an option to correct a video link when adding or editing a film to the site, and it's also accessible from the DIY page (on that page, anybody can add custom subtitles to most Youtube videos).

I modified Alexander Pruss's excellent stretchVideo.js bookmarklet , except that whereas his code scales the "video" element on a web page, MY code scales the iframe containing the video, which means the Youtube buttons ALSO look squished. But it works, and I had to do it this way because I couldn't modify the video element embedded from Youtube (cross-site Javascript scripts seem to be a security risk, tsk-tsk...).

Another little bug I fixed was that until today, selecting "-none-" for the subtitles beneath a video would not actually remove the subtitles. It does now.

Also, for a while now, it has been possible to browse by "decade" (click on Browse, it is one of the options.)

I really should add a little "news" section in which I could post these little technical updates, which would appear on the main page, and site members could comment on them, and maybe a forum for public discussions (there's already a discussion and PM system, it probably won't be that much more work). Well, it goes on the TODO list.

Actually, the main big feature I want to add (and it's a very important one) is to allow other sites besides Youtube, such as Dailymotion, Vimeo, VK, OK, Bilibili, maybe even ivi.ru. The author of the Javascript code I use to display and sync the subtitles thinks that it should be possible, but isn't interested in doing it himself. So far, I still don't understand his code sufficiently to know where to make the changes. I can see that a lot of it seems to be copied and pasted from various places (such as Youtube's Player API examples), but the lack of notes is making things difficult.

And another good thing to add would be a "requests" section. The goal is for the site to be comprehensive eventually, but until then, specific requests that have been sent have gotten priority.

For example, the excellent Cat Catafeyevich by Galina Barinova (wife of Anatoliy Petrov) was a request...

...as was the trailer for Afanasiy and Trimurti...

...a rather original & psychedelic-looking animated feature project about Afanasiy Nikitin, a 15th-century Russian explorer who visited Persia and India, that may never be made because the creators can't find funding.
Collapse