I recently came across a real gem - a Soviet 1941 cartoon with wonderful art direction (inspired by early 1930s American cartoons) and character animation that is leaps and bounds above most of the other films of the young studio during the same period. It is the first cartoon adaptation of Chukovskiy's famous children's poem "Chatty Fly" (Muha-Tsokotuha), about a fly who finds a coin and goes to buy a samovar. 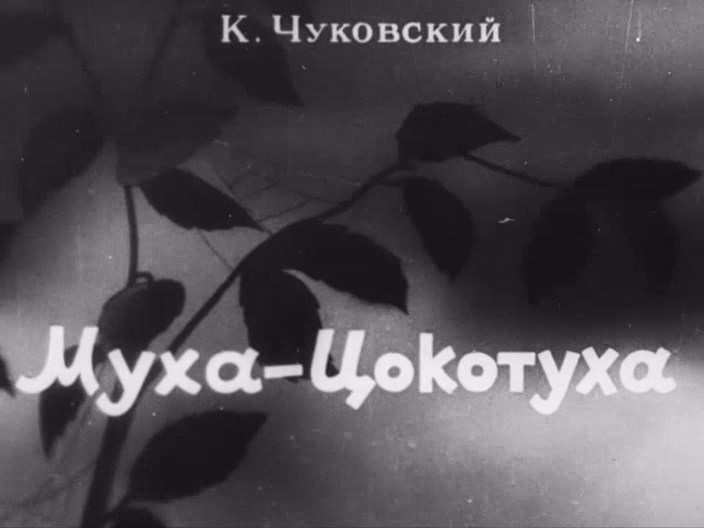 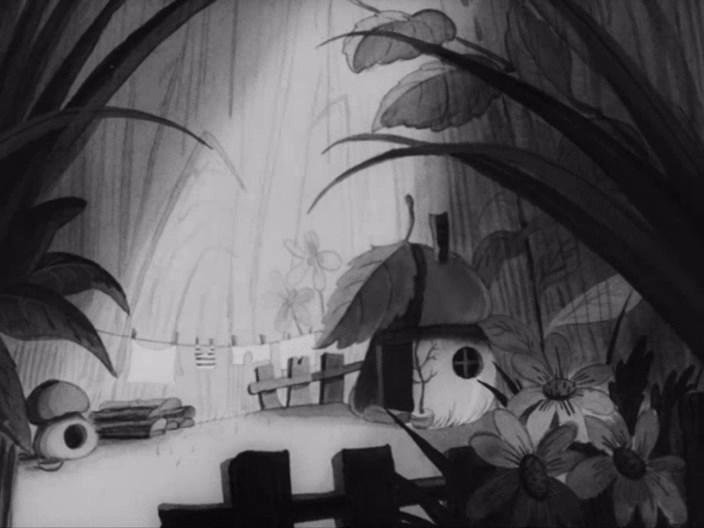 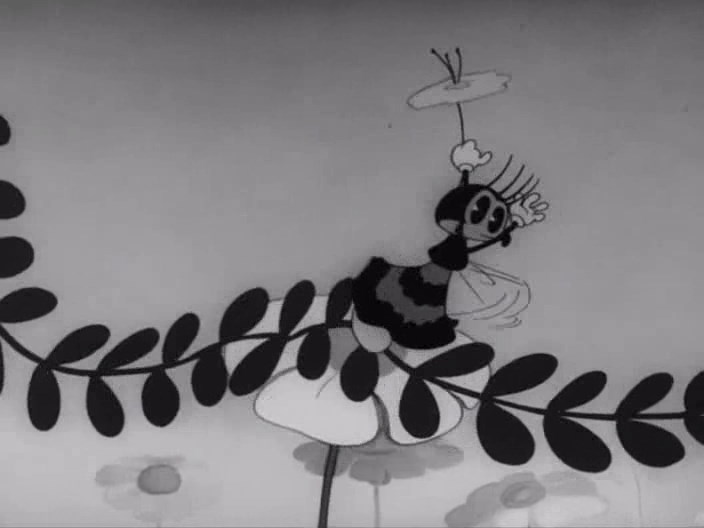 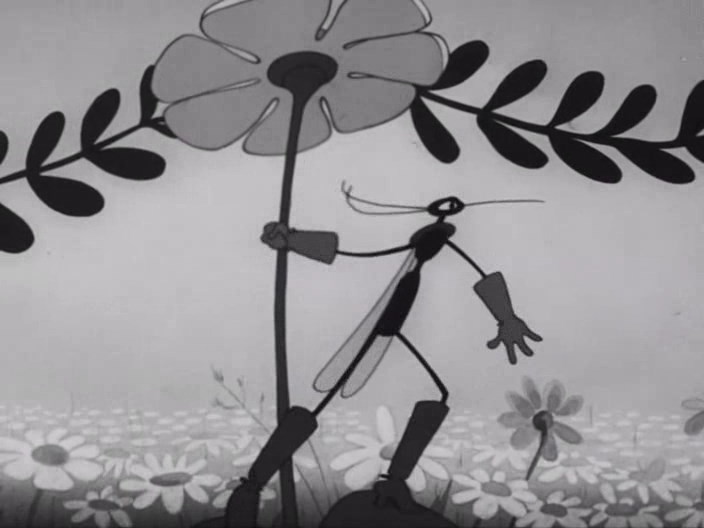 The mosquito who will save the day

It can be watched on Animatsiya.net (CLICK HERE) with a new English translation that I made for it, as well as the 1960 remake (but I prefer the original). The translation keeps the original rhyme scheme, and I'm rather proud of it.

Unfortunately, the cartoon was finished only hours before Germany attacked the USSR, and as a result had practically no distribution. After the war, with the negative damaged and the sound apparently lost, the studio eventually decided to make a colour remake. But they gave it to a different director (Roman Davydov) who made quite a few changes. 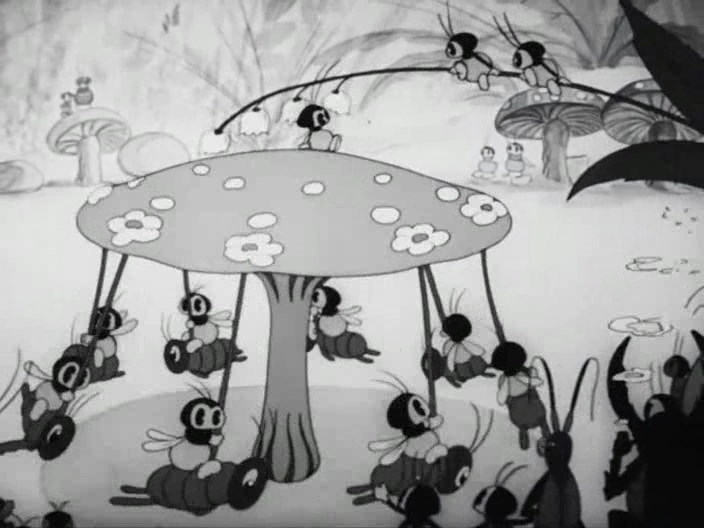 The co-director of the 1941 film, Boris Dyozhkin, was not a fan, though he liked the colour. The original 1941 version was totally inaccessible until being restored only a few years ago, by using the soundtrack from the 1960 film (which used the same sheet music), as well as some newly-recorded sounds.

Since some things in 1960 were different, you may notice when watching it that there are some sounds that don't correspond to the 1941 version. For example: the fly's caterpillar is heard barking, but doesn't really. The cut to the fly jumping on flowers is a bit sudden. Perhaps most obviously, at 2:41 the voice saying the final line is an octave below the fly's. Still, it fits remarkably well overall.

The 1941 film was uploaded on culture.ru this spring. It is no longer there, but can still be found in some other places (e.g. RuTracker). 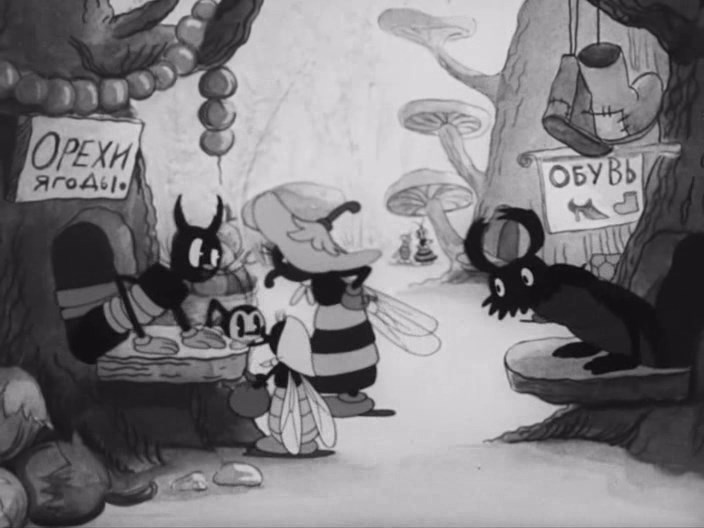 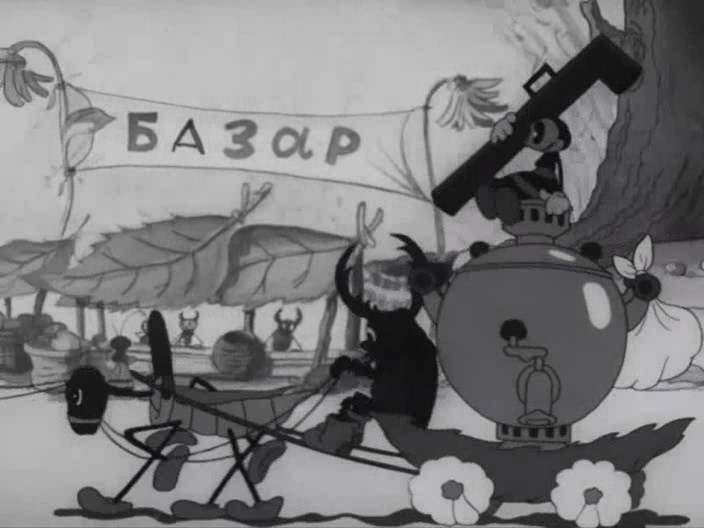 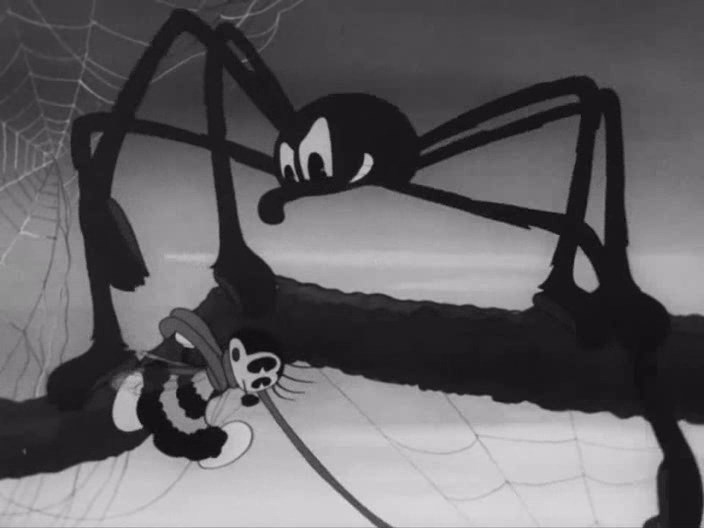 The details of this restoration, as well as more info on the film, are related below in an article written by Russian animation historian Georgiy Borodin, originally published in the 2019 catalogue of the "Belyye Stolby" film festival. The translation is a little awkward in some spots, but it should be understandable.

THE FATE OF THE FLY
By Georgiy Borodin

Many sources have noted that the film "Chatty Fly" by Vladimir Grigoryevich Suteyev, based on the eponymous fairy tale by K.I. Chukovskiy, was surrendered to the film management a few hours before the start of the Great Patriotic War. Documents indicate that the production of the film ended on June 17, 1941, and the distribution certificate (passport) for it was dated June 23rd. Obviously, wide distribution of the film did not take place - it was prevented not only by the ten-minute format, but also by the outbreak of the war. However, the film was remembered by many professionals - in particular, Ye. T. Migunov recalled watching it in the hall of the Soyuzmultfilm studio:
“…I'm watching a scene from "Chatty Fly"… A villainous spider with a cobweb-lasso, accompanied by a mad percussive beat by [Hungarian-Czech-Soviet jazz drummer] Laszlo Olah, captivates and entangles the poor Fly. The scene is immaculately, logically developed in full accordance with the musical outline, dashingly drawn, executed with broad strokes. A contrast of movements and pauses. A piercing dynamic scheme. Nothing is wasted. Free-style drawing, impudence and plasticity. And what power!
This was autumn '41. The early days of "practice" at Soyuzmultfilm. In the pause between bombings, we sat in the studios's small viewing room.
The little assistant-planner Varenka Shilina, "assigned" to us, whispers: "This is Dyozhkin's scene! Watch and learn!" I recognize Dyozhkin's hand. The legendary Dyozhkin, favorite and pride of the studio. The film was made in the pre-war year. Recently completed and handed over. Literally - right before the war. I am stunned with admiration...".
The functions of Boris Petrovich Dyozhkin in the film crews of the pre-war films by V.G. Suteyev (“We're Also Going to the Olympics!”, “Chatty Fly”) included, by all indications, control over animation. We can safely assume that, in addition to making his own scenes, Dyozhkin participated in the distribution of tasks, the acceptance and editing of the finished work of the animators, which is why the plastic side of these films is noticeably more perfect and more integral than in many films of previous years and even in the films of other directors of the studio that were made at the same time.

In 1950, the Soyuzmultfilm quality control dpt. stated that the negative of "Chatty Fly" could not be admitted to print due to a partial defect of the image (from poor processing-washing, yellow spots appeared on one meter of the negative) and the absence of the soundtrack (apparently lost during the war). The flick became become a legend, inaccessible, almost lost.

In the late 1950s, it was decided to make a color remake of Suteyev's film. This decision was motivated, in particular, by the fact that there was virtually no distribution of the 1941 version. The creation of a new version was entrusted to the animation artist Roman Vladimirovich Davydov, who had worked on the first film - a director and artist with his own graphic and editing “signature”, different from Suteyev's and Dyozhkin's. To create the musical score for the film, the score of Aleksey Nikolayevich Sokolov-Kamin, which had been preserved in the archives, was used. Apparently, the recording of the orchestra was timed "to the image" of the 1941 version. The color scheme belongs to Viktor Aleksandrovich Nikitin. The cartoon partially copies the plasticity of the pre-war film, but does not completely coincide with it.
After the studio premiere of the updated "Chatty Fly", B.P. Dyozhkin told V.A. Nikitin that he had no complaints about his work, unlike Roman Davydov's, with whom he would "have a serious chat."

For many years, Suteyev's film has been judged by the color version of R.V. Davydov, which was completed in 1960 and received such a harsh assessment by B.P. Dyozhkin. However, a comparison of the two versions shows that Davydov really seriously reworked the original film, and the artistic decisions of Suteyev and Dyozhkin were significantly modified at the same time. First, Davydov changed the types of many characters, including the fly herself, who in his version took on a completely different look. Second, in a number of places he diluted the editing with close-ups, which was not in Suteyev's version. Third, in many episodes, Davydov added new details to the action or, on the contrary, abandoned those that were present in the 1941 film. This applies to both animation and editing. For example, in the scene of tea drinking, the characters moving on the lower layer were replaced by static ones drawn on the background; in the final episode, the theme of a quarrel and reconciliation between Fly and Mosquito was added, the ending was completely changed, and much else. Fourth, in the episode of the gathering of guests to congratulate the Fly, he swapped two rather large sections. Finally, he completely changed the scene of the appearance of the Spider, of its running out of the tree hollow, "breaking" the plastic pattern given by Dyozhkin (a two-time repetition of three "bars": running, muttering, stamping feet).

The idea of ​​reconstructing the soundtrack of the 1941 "Chatty Fly" using the sound of the 1960 remake arose on the eve of the 100th anniversary of the birth of B.P.Dyozhkin in 2014. It was then that a positive copy of "Fly"-41, printed by the Gosfilmofond for the Soyuzmultfilm studio in the 1990s, was digitized. However, due to the obstacles posed by some of the studio's employees at the time, it was not possible to complete this work by the deadline (for the Kinoproba festival held in Yekaterinburg in early December). The second attempt to implement such a plan was made at the turn of 2017 and 2018. Thanks to the help of Aleksandra Yevseyeva, who carried out the technical part of this painstaking work, the results of the joint work were presented to the Soyuzmultfilm employees at the beginning of 2018.

The main difficulty was "fitting" the soundtrack to the image with the recreation of the effect of the unity of the drawn movement with the music. In the course of this work, it was necessary to combine visual accents with musical ones, moving the sound track relative to the image literally by fractions of a second. The sound speed of the digital recording had to be changed (the soundtrack was taken from a licensed disc, recorded using the 25 fps system). Unfortunately, it was not possible to remove some noises and cues that were absent in the black and white version. The sound of the different sections, rearranged in the new version by R.V. Davydov, was "stitched" relatively easily due to the fact that Davydov divided the scene into two parts exactly along the border of musical measures. But for the section with the appearance of the Spider from the tree hollow, an adequate sound solution was not found. To get an idea of ​​the original musical accompaniment of this fragment, we asked for help from the artistic director and chief conductor of the Russian State Symphony Orchestra of Cinematography Sergey Ivanovich Skripka and the director of the orchestra's concerts Sergey Kapkov, thanks to whom the orchestral score of this episode was found and copied. However, in the absence of any budget, we had to limit ourselves to a partial, very approximate synchronization of this section with the existing fragments of the audio track, which, unfortunately, does not give a clear idea of ​​the original artistic solution of Suteyev and Dyozhkin. Hopefully in the future it will be possible to create a more accurate sound reconstruction.

Nevertheless, I believe that we have reached the fullest possible approximation to the version of the film which was completed by V.G. Suteyev in June 1941. Now this half-lost picture has regained the ability of a full-fledged impact upon an audience and returns to cinematography, without losing its primary quality - sound-plastic integrity and polish.
Collapse